Maybe it’s that time of summer, but historians seem to be thinking about the tools they use to conduct research. The AHA has set up a Pinterest board called A Digital Tool Box for Historians, my new colleague Stephen Robertson has posted an essay about moving to digital sources, and Nate Kogan has written about his use of Zotero, Word, Scrivener, and Papers 2, though he tweets that I showed him something of Filemaker Pro back in the day.

I figure I’ll throw my hat in with a description of my current process, ugly as it is. I offer this information both to offer and seek help, since I think I am doing some things right but could be doing other things more efficiently.

In the Archive: Camera, Tripod, Laptop

Most the archives I’ve worked in over the past few years have allowed unlimited digital photography. I camp out at a desk and shoot hundreds of images each day.

My camera is a Canon Rebel XT DSLR, which is relatively less impressive than when I bought it in the summer of 2005 but is still fine for the archives. I particularly rely on its capacity for remote shooting. When I tether it to my laptop (MacBook Pro, 2010) with a USB cable, I can use the laptop to trigger the shutter and have the image stored on my hard drive, rather than on the camera’s card.

Tethered shooing offers several advantages. First, it doesn’t shake the camera, so I can shoot at small apertures despite the resulting slow shutter speeds. This gives me enough depth of field that as I get to the bottom pages of a folder, I need not refocus the camera.

Second, my photos appear on the laptop screen, so I can quickly review what I’ve shot to see that I got adequate resolution and that my hand wasn’t in the way.

Most importantly, shooting to the laptop drive keeps the images organized. I create what I call a “shooting folder” to receive these images. Once I’ve photographed all I want from a physical archival folder, I move all the images to a computer folder with that name. Thus, I replicate the archive on my computer. 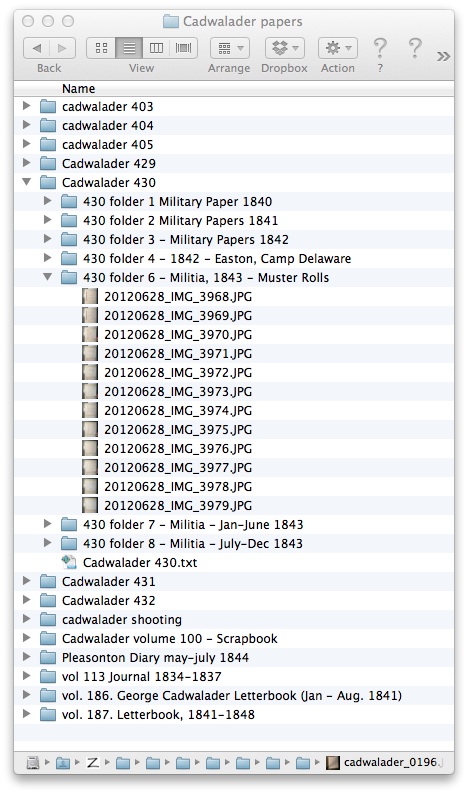 Images of the George Cadwalader papers, organized into computer folders with the same name as the physical folders at the Historical Society of Pennsylvania

In some ways, the choice of tripod is more important than the choice of camera. I use a Manfrotto 3021BPRO, also from 2005. Manfrottos have the crucial ability to swing their center column 90 degrees, so the column is parallel to the table surface and the camera can shoot straight down. In other words, the tripod becomes a portable copy stand.

With my tripod one must disassemble and reassemble the column; newer versions manage the trick without this step. Also, while mine is aluminum, for a little more money you can get lighter, carbon fiber legs.

I use Canon’s ImageBrowser software to page through my photographs and read the documents. It isn’t perfect; one can only zoom in fixed increments (50%, 75%, 100%), and rotating an image takes more steps than it should. But I haven’t found anything better. From what I’ve seen, other scholars take the time to import images into some other software: Zotero, Papers, iPhoto, etc. With ImageBrowser, I need not import anything. The file is created on my hard drive and ImageBrowser displays it, end of story.

When I find something of interest, I take notes in a FileMaker Pro database that is the latest version of something I put together 15 years ago for my dissertation. It’s crude compared to a more polished product like Zotero, but I rely on FileMaker’s easy scripting. For example, I timestamp my notes, so that after I go off on a distraction, I press a button and it shows me all the notes I’ve taken that day, in reverse chronological order, reminding me where I was.

More importantly, I use a script that creates a new record but with the same archival box and folder number that came before. This saves me a lot of time when I’m working through an archival collection with hundreds of documents, and it’s not something I can do with Zotero. (I’ve asked.)

To display a high-resolution photograph next to the space where I’m taking notes, I’ve recently purchased a Dell U2713HM monitor, 2560 x 1440 pixels. It’s that vertical pixel count that’s particularly important; I have another monitor (at work) that is 1200 top to bottom, and it just isn’t as good at letting me see all of a document at once. 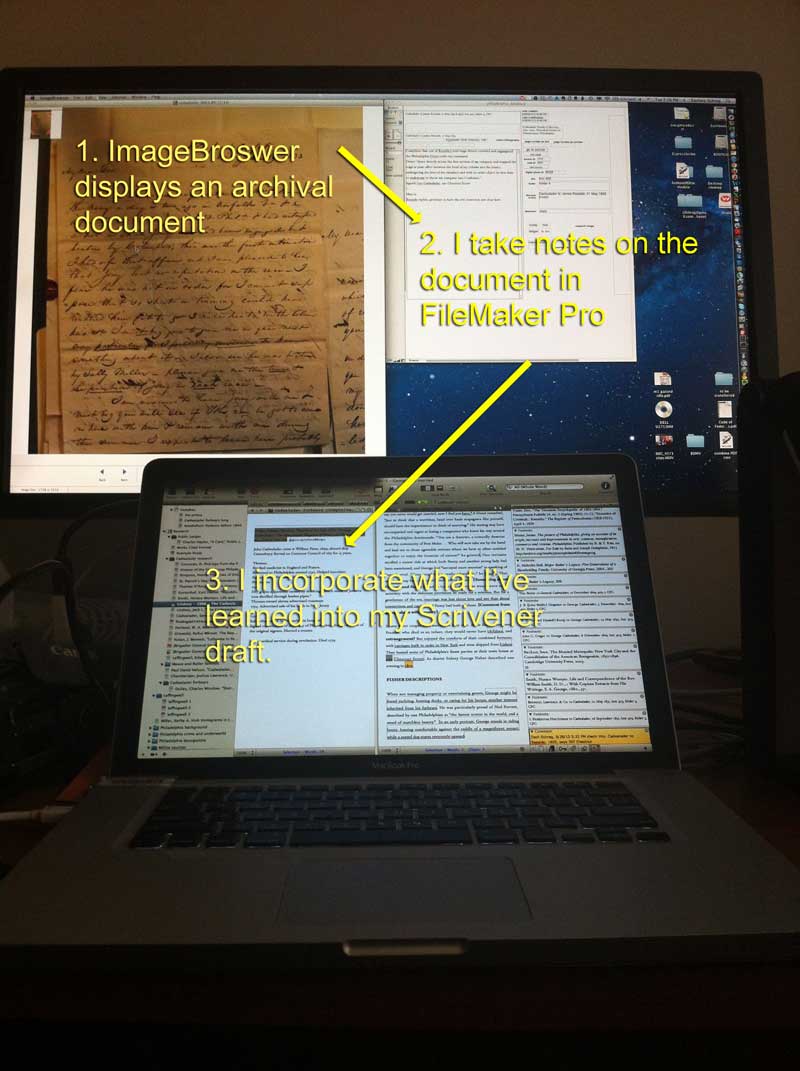 My two-monitor workflow. From ImageBrowser to FileMaker Pro to Scrivener

Plenty of historians have sung the praises of Scrivener, so I need not repeat their work. Let me just say that for the current book project, I’m often unsure where a particular story needs to be told, and it’s just great to be able to move it around so easily. Or, when I come across multiple key facts in a document to have instant access to any part of my narrative, so I can write up those facts in the appropriate places without opening or closing any documents.

As I make more progress, I expect that Scrivener’s word count features will become quite important as well. But I don’t anticipate using Scrivener for taking notes, since its find function doesn’t work like that of a database: delivering a set of cards with matching criteria.

I’ve set up the monitor so that it sits above and behind my laptop screen. So I can have ImageBrowser displaying a document on the left side of the monitor, my FileMaker notes on the right side, and my Scrivener draft on the laptop screen below.

What could I be doing better?

I am quite pleased with Scrivener, with Canon’s remote shooting function, and with my tripod and monitor. I recommend these for consideration by other historians.

I suspect that for at least two functions–viewing images and taking notes into a database–I might be better off with different software, but I just haven’t found it. I welcome recommendations. For the latter, I’d love something that combines Zotero’s ability to grab metadata on published sources with Filemaker’s scripting capacity, or, at the very least, the ability to create new notes based on old ones, and the ability to sort one’s notes by date and time.

6 thoughts on “My Quirky Workflow”